The year 566 is long, long gone. So long, one can no longer imagine what people’s lives were like back then. But every now and then, often in very surprising places, Scotland gives us a little look back in time, such as in Mortlach (Dufftown). A small, inconspicuous place in the middle of never ending destilleries, in itself nothing special, and yet worth a closer look, as the name of the place already reveals.

Mortlach has nothing to do with the French word mort for death but with the name Moluag. St Moluag founded a monastery here in 566. It was the time of Christianization in Scotland, the Romans had withdrawn, the Vikings raided the coasts and Irish monks brought the Christian faith. Saint Moluag came to Banffshire from Lismore on the west coast of Scotland.
There are no traces of the early church left in today’s building, but parts date back to the 11th century.

But what is particularly exciting is what lies behind the church in Mortlach and that actually has to do with death – a watchhouse, still complete with gutters and a chimney, testimony to a gruesome time when grave robbers dug up freshly buried corpses in the dark of the night to sell them to doctors and universities for good money. The first steps in anatomy were almost all illegal in the 19th century, and the number of bodies that doctors were allowed to autopsy did not meet the need medicine developed. The means to protect the dead were manifold, a watchhouse was one of them.

There are plenty of creepy but also funny stories about these small buildings and the men who spent their nights in them. One of these stories tells of two cranky old Scots who kept watch in one of these watchhouses (which one it was is not known, it might have been the one in Mortlach). The night was dark, and the wind howled around the gravestones and every sound seemed to them like the groan of a dying man. Then steps were approaching, someone slowly walked towards the house.

Someone undead? Or the devil coming to get them?

In their horror, they reached for their guns and fired out into the night. Then silence. Only the wind between the gravestones.

They must have caught the grave robber, they were thinking and probably had a dram or two for courage. But they did not check. Only when the sun slowly lit up the cemetery did they dare to leave their watchhouse. And there was the truth lying in its own blood in the graveyard.

They had killed the minister’s cow. 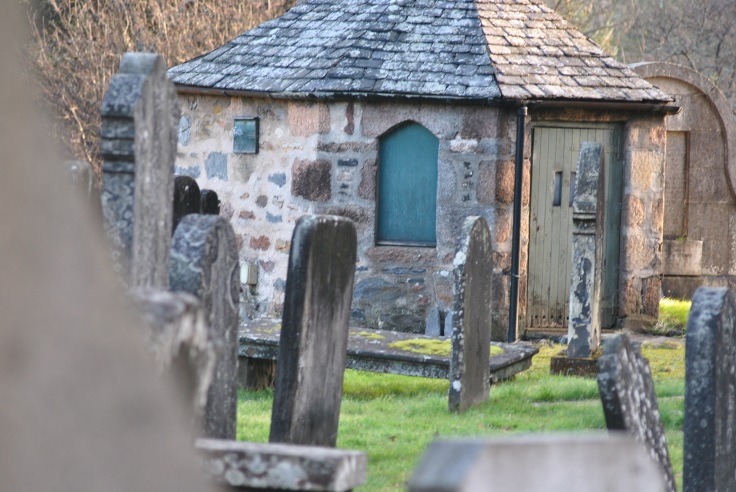 Margaret Bennett: Scottish Customs from the Cradle to the Grave. Birlinn, Edinburgh, 2004

5 thoughts on “one holy and two frightened men”