The name Ollaberry derives from Old Norse Olarfsberg, the hill of Olaf. It is a small settlement on the Northmavine peninsula of Shetland Mainland, the land north of the isthmus Mavis Grind. Northmavind offers spectacular views. 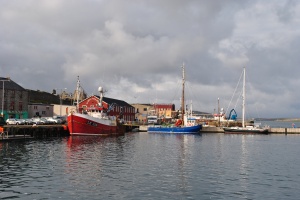 There is arable land around Ollaberry but the sea still is and always has been both livelihood and death for many men of the area. So many have lost their lives in the rarely calm waves. So many women stood on solid ground waiting in vain for their men to return.

In Northmaven much loss of men at sea; seldom a year passes but some perish here; a few weeks ago three boats with 16 men were lost, leaving behind them 11 widows and 46 children; the remaining two were miraculously saved by a neighbouring boats crew.

Saw a woman who had lost her husband, four sons, several brothers, and other male friends, all at sea, and seemed a widow, the last of all her race.

George Low: A Tour Through The Islands Of Orkney And Shetland. William Peace & Son, Kirkwall; 1774

Many never made it to the graveyard of Ollaberry. Their grave is the sea.