Entering Inverness from the South, the traveller passes a small, wooded hill with a peculiar shape that rises steep behind the Caledonian Canal: Tomnahurich.

A large burial ground with old graves on the hill and newer ones circling it.

Nothing spectacular seems to hide behind the high gates of Tomnahurich.

For those who do not know because normality is nothing but an illusion on this site full of ancient myths and dark stories.

The hill is a natural rarity,

a so-called esker, a ridge of solid sand and gravel, formed by glaciers long before time. That is the geological point of view.

Fairies live where the dead lay buried, have lived in that hill for longer than man can remember. Unseen by most and those who saw them, paid for it with their lives.

Two fiddlers were once lured in, to play on a night of feasting. When they returned the next morning to breathe the fresh air of Tomnahurich hill, they crumbled to dust. 200 years had passed in what they had believed to be one night

Some say Thomas the Rhymer is buried beneath that hill. Maybe the lover of the fairy queen still lives inside….

The graves are old on the hill of the fairies; the slopes are steep and the paths mysterious and dark.

As were the prophesies of the Brahan Seer, the Coinneach Odhar who “received his gift of the second sight from the sithean, those ancestral spirits or fairies who haunted burial grounds and graves, and within whose bounty the gift of the second sight lay.” (Elisabeth Sutherland: Ravens and Black Rain. The Story of the Highland Second Sight. Corgi, 1987, p 200)

The Brahan Seer made two true predictions concerning Tomnahurich graveyard in the middle of the 17th century:

Strange as it may seem to you this day, the time will come, and it is not far off when full-rigged ships will be sailing eastward and west by the back of Tomnahurich Hill.

The Caledonian Canal, built and completed in 1822, connects the Great Glen with the sea and many ships take the the route right behind the hill. How could the canal be foreseen two centuries before it was built? 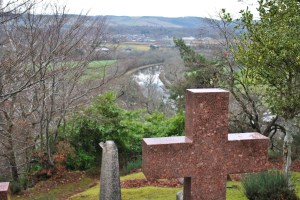 The day will come when Tomnahurich (the fairy hill) will be under lock and key, with spirits secured within.

The Brahan Seer saw gates and closing hours of a graveyard that was established three centuries after his lifetime.

Right on the outskirts of the busy capital of the north, Inverness, rest the dead in mythical earth, buried around and on the hill of the fairies. 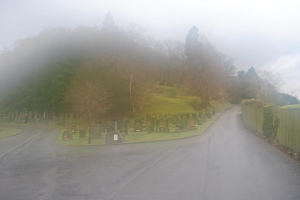