Funeral rites are sombre, grave and placid; at least in most European countries they are. Scotland can be a very different matter when it comes to burying the dead. Funerals are sometimes full of humour, drink and the sharing of reminiscences with a smile.

In Petty, just about

7 miles outside Inverness, the mourners would even run as fast as they could. With the coffin on their shoulders.

Castle Stuart, completed by James Stuart, 3rd Earl of Moray in 1625 and outrun soon after, lay derelict for 300 years until it became a luxury hotel with an adjacent golf course. Just a mile above that business-run baronial tower house is the graveyard of the parish of Petty.

This is where the people would run to with their dead. So was the local custom until 1841 when it was finally abandoned because they nearly dropped a coffin. One of an old woman who was feared to be a witch.

But until then, the people of Petty would run. Running with sweat they would run with the coffins.

The custom became known as the Petty step. People ran because people believed that the spirit of the last person interred would haunt the graveyard until the next funeral would arrive. No one wanted that for their relatives and friends. 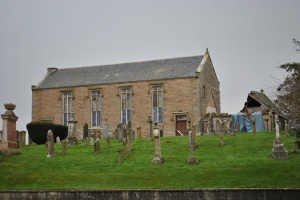 Because one day, there had been two funerals in Petty and two coffins were carried towards the graveyard at the same time. One party started to speed up. The other tried to keep up and overtake. The first party made haste. It ended in a race towards the most final destination of all. None of the two parties wanted to come second. No one knows which party made the running.

Today nobody is running anymore. Petty church and the adjacent mausoleum of the Mackintoshs are rundown and inaccessible.

Time, it seems, has run out for Petty.