Anyone interested in Scottish history and culture will at some point come across the seanachie, the Gaelic teller of old tales.

Gaelic culture was very much an oral one and a Seanachie in those days had the responsibility to tell the tales of a clan or noble family as a keeper of history and traditions. Only later, after the Gaelic traditions were forced to give way to the English influence in the 1600s, the Seanachie moved away from orally recording family history and the glorious deeds of his chieftain to telling Gaelic folk tales for education and entertainment. After all, once the Gaelic way of life had come to an end after the English invasions, the traditions had become tales from the past. Traditions, that could only be kept by not being forgotten through stories told.

Therefore, a Seanachie is so much more than just a storyteller, he is a keeper of traditions, a bridge to the past, a bearer of wisdom and a reminder of things lost or nearly forgotten. But he also entertains and amuses, strikes fear and awe in those who listen and leads the mind of many a child into the realms of myth and folklore.

Alexander Stewart was born on Benbecula in 1829 and was minister in Ballachulish and Onich for half a century. He died in Onich Manse 7th January 1901. His wife died a year later. The Celtic Cross memorial that now stands in Innis na Birlinn cemetery near Corrran, it once stood near the post office in Onich but had to be moved when the road was widened.

Under the pen name of Nether-Lochaber (a historic area in Mid-Argyll) he wrote about his dogs and hedgehogs with humour, and with wisdom about the ancient artefacts he had found, about natural history, folklore and legends. Stewart soon became a tourist attraction in the area around Ballachulish. He was a poet and a translator of Gaelic poetry and campaigned for Gaelic to be taught in Highland schools. Something which is quite natural today but certainly wasn’t during his lifetime.

You need to know where to look to find the graveyard and the memorial, both are virtually invisible from the busy road between Ballachulish and Fort William. It is worth a visit, though. 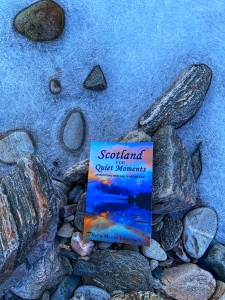