Old Olnafirth Kirk lies in ruins and has done so for more than a century. It was once known as St. Olaf`s Church and goes back around 300 years. 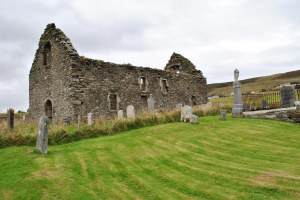 Saint Olaf is not a traditional name in the Christian world but it is a famous one and one that left its mark through many centuries and countries. Churches dedicated to Saint Olaf tell a history often of raids, wars and invasions but also of faith, peace and change. The story of Saint Olaf’s live and reign.

The Roman Church had sanctified a Viking Chief. His name was Olaf Haraldsson and he lived in the 11th century. There are various sources to the saga of Olaf Haraldsson.

He was a man with an interesting life: early exile in Russia, a pirate in the Baltic sea who took the Christian faith. He raided England and Spain and returned to Norway where he settled and strengthened faith and country alike when he reigned as a great king for thirteen years. 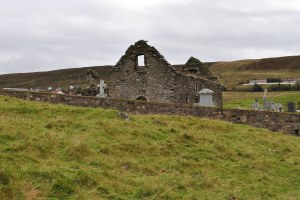 His personality remains ambiguous, kind and generous, aggressive and powerfuk. He might have been all of that at certain times during his eventful life. This Olaf became known as “Norway’s eternal king”. With him had come Christianity to Norway, he became Norway’s patron saint.

Olaf worked various miracles. Once a blind beggar regained his eye sight after touching the blood of the dying saint with his hands and afterwards his own eyes. The saint’s blood had the power of healing. 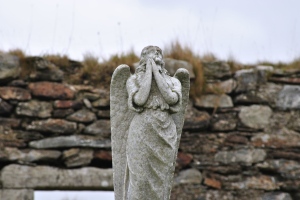 Numerous churches in Sweden, Iceland and Norway were dedicated to Saint Olaf.

Old Olnafirth Kirk is a reminder of the strong Norwegian connection of the Shetlands.

James III had married Margarethe, Princess of Norway in 1496.

Only then did Scotland gain the islands of Orkney and Shetland that had until then been possessions of the Norwegian crown. By then, Scotland had paid 100 merks a year for over 200 years, the “annual of Norway”. An annual that was often “forgotten” to be settled.

By Act of Parliament in 1472 the islands were annexed and from now on officially part of Scotland.

The Norwegian influence, via language, place names and traditions remained strong and a Norwegian patron saint to a church in Olnafirth is not surprising considering history.

Olaf’s body lies in the Nidaros Cathedral in Trondheim.

The graveyard around the church ruin was still used even when Saint Olaf’s wasn’t anymore.

Magnus Magnusson: Scotland – The Story of a Nation. Harper Collins; 2000