If you travel to Forres, as Shakespeare’s Macbeth did in the Scottish play, you will come across a strange, supernatural thing. Just like he did. 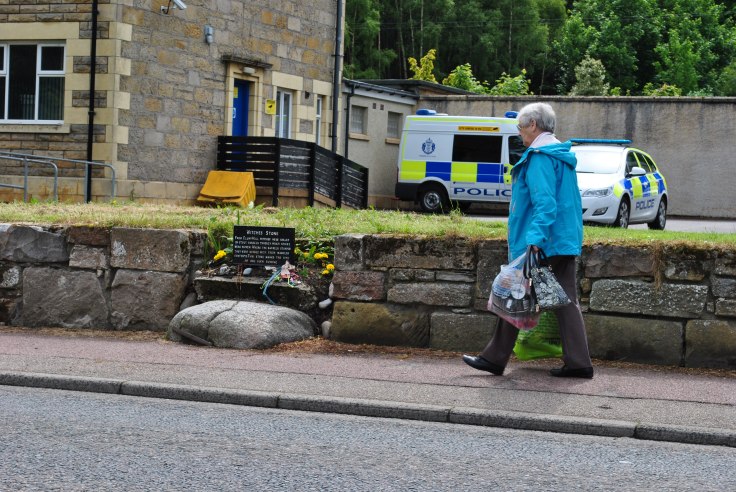 Not in a cavern with a boiling cauldron in the middle, not on a wild eerie heath but right in the present everyday normality in front of Forres’ police station: evidence not only of magic but also of murder. 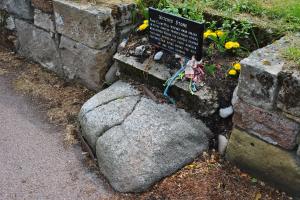 The witches stone in Forres is a massive granite reminder of brutal times long past. Said to be one of three stones that marked the graves of the three witches, those who prophesied Macbeth the access to the Scottish throne and instigated the murder of King Duncan, a murder by proxy. Of course Macbeth is a play but Shakespeare based the characters and events on historical research. 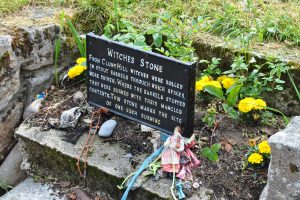 It seems a weird coincidence, that this stone happens to sit right in front of the local police station, there because this is where a witch found her death, a horrid gravestone in a singular graveyard without a body and a murder scene right under the eyes of the law.

From Cluny Hill at the back of the police station the witches were rolled down, stuck in a small but stout and closed barrel with spikes on the inside. An incredibly cruel torture and most of them must have been either dead or close to death by the time the barrel stopped moving, which was exactly in the place where the witch’s stone sits today. They burned the barrel right at the same spot, with the poor woman accused of witchcraft inside. 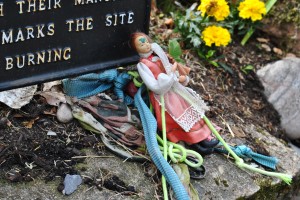 The belief in witchcraft was strong in Scotland in the 16th and 17th century.

Quite a few people still believe in the “evil eye”.

pparently somebody had tried to take the stone away and use it for building some hundred years ago. He was stopped trying to break the stone up, which is why it is now held together by iron staples. Obviously the man did not believe in evil spirits.

One of the most notorious Scottish witches was Isobel Gowdie, a young woman who lived in Auldearn, near Forres and was tried in 1662 but never tortured. She might have been mentally deranged because she had confessed to using a broom for flying and transforming into a hare. Isobel Gowdie died on Gallows Hill outside Auldearn, strangled and then burned. 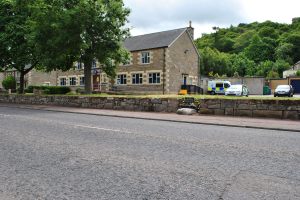 The witches stone in Forres commemorates the “witches” of Forres but also all the unknown women brutally tortured and murdered in the name of God, with no grave, no stone to tell the horrible story. So many unknown women in the Middle Ages faced fear, pain and death without hope of justice, compassion or retribution.

Therefore its location couldn’t be more appropriate: right in front of the police station.