Gavin Maxwell and his pet otter Edal rest in Sandaig bay, one of the most beautiful places in Kintail if not the whole of Scotland, Maxwell called it Camusfeàrna in the books that made him famous. This was his home, past and final. This was where he used to sit and watch nature and his pet otters at play. Far away from it all.

Amidst the dull winter colours there comes a light, sparkles on the salty ripples on the Sound of Sleat. In the distance, white-capped mountains rise over the water, the Isle of Skye towers over the sandy circle of Sandaig beach. This is the spot.

Camusfeàrna: A place almost painfully beautiful, its remoteness touching and inspiring, sad and melancholy for those who can’t bear to be alone. Heaven for those who can. It is uninhabited now, a graveyard for just one man and his otter. He finally rests where he most loved to live. There is no better place for a grave than that.

Gavin Maxwell died of cancer in 1969. His life was wild, romantic, dramatic and exotic but it was very likely not a happy one.

He was born into an important family, his grandfather being the 7th Duke of Northumberland; he grew up in Scotland’s South and soon developed an intense interest in nature. He graduated from Oxford and worked with the Special Operations Executive during World War Two. That alone could be material for more than one novel. He spent time in Iraq and Morocco and wrote fascinating accounts of his travels. But he must often have felt a stranger in this world, happy to retreat and shun society. A solitary man, a homosexual who suffered from depression. A man larger than life. 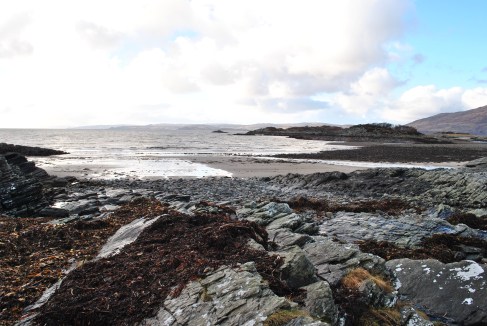 He found Sandaig and settled with an otter he had brought from Iraq. A tame rare species, his pet. He wrote, played with his otters, he studied nature. All around him the stunning scenery of the Scottish West Coast. Maxwell must have felt safe here.

Ring of Bright Water, the book that made him famous and inspired a love of nature in many, was written in Sandaig. He made money with it but lost it again to business concepts that never worked out.

Edal, his beloved otter died in 1968; it had possibly caused a fire that destroyed Camusfeàrna and killed it, a fire that broke out at night while Maxwell was sleeping. Maxwell left and died a year later. Edal’s remains rest under a large pine, Maxwell’s ashes a buried close by under a boulder. They are in death where they were most happy in life, close and one with nature in the most beautiful of places. Peaceful graves indeed.

To get to the graves you take a short walk to Sandaig beach from Upper Sandaig on the Glenelg to Arnisdale Road. There is no need to climb over the rope to cross the burn. A wide road leads down to the bay. It turns into a smaller path for the last few yards.