The sea is a dangerous friend, a deadly beauty and an undiscriminating killer. Even on calm days people have drowned in the waters around the islands of the North. When the autumn storms set in, the mighty waves will have had a deadly feast in the past. 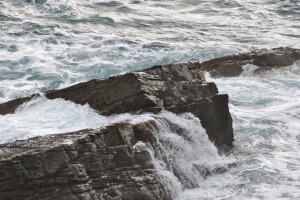 Many a body washed ashore on Shetland around Sumburgh Head, the southernmost tip of mainland Shetland, where the Atlantic meets the North Sea.

For over four thousand years people have settled here. The breathtaking remains of Jarlshof unveil all kinds of settlements, wheelhouses, roundhouses, longhouses, manor houses; from the Stone Age to the end of the 17th century. 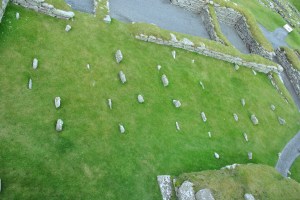 The bodies, the storms had washed ashore over the centuries have been buried here. A local believe that can well be true. Proof is impossible.

The unknown got a grave right next to the big hall. In a stony field of the unknown dead, each of them commemorated by a marker stone. Sacred ground instead of wet graves for shipwrecked sailors.

It is a truly touching gesture by the former inhabitants of Jarlshof.

The Bruce family, who owned the land, have a private burial place near the field of the unknown dead. It is but a small enclosure, remembering John Bruce, who had started the investigation into the ground at Jarlshof.