a prince drowned, a church gone and a Loch renamed

The Isle of Skye boasts an overwhelming richness of meaningful place names coming out of two linguistic sources: Gaelic and Old Norse, the latter because of the invading Viking forces. Norse names can be found all over the island but mainly along the coast where the Viking ships landed so long ago.

The first recorded Viking attack on Skye took place in 794 AD. 875 AD saw the arrival of Norwegian settlers on the island; by 907 intermarriage had made the islanders a Celtic-Norwegian mix. In 1098, in retaliation for the killing of a Norse viceroy, the kings of Norway invaded the Western Isles and set up the Kingdom of Man and the Isles, under Olave the Red… Scottish kings never accepted the territory as Norwegian and constantly strove to incorporate it into their realm, which they finally did in 1266.

Two cultures developed from invasion to co-existence, as the people mixed, so did their languages. New words came in replacing the old ones, sometimes both languages merged to form a new place-name together, as in Glendale which is simply describing a geographical situation twice. Glendale is a pleonasm, the two words glen and dale both mean the same thing: valley and the valley in question opens up towards a sea loch, in ancient times called Loch-a-Chuain like the church Cill-Chodhain or Chomhain (Kilchoan) a few hundred yards inland. 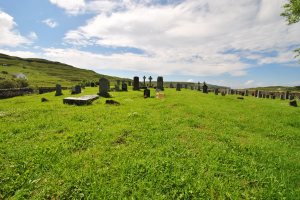 There is no trace of the old church of Kilchoan in Glendale graveyard, which is still in use. The reason the Gaelic Loch-a-Chuain changed to the Gaelic-Norse Loch Pooltiel lies hidden here, in this very graveyard.

death of a prince

According to local legend, a young  Viking Prince called Diel or Tiel is buried here under an ancient tree. Some sources say he was from Norway, others from Denmark, but a Viking he was and shipwrecked and drowned in the cold water of Loch-a-Chuain.

His body was carried ashore by mermaids says the romantic twist to the story. The prince was buried next to the ancient church of the Gaels and the Loch was given a Norse name from now on:  Pooltiel – Diel’s Pool. The river that meanders along the graveyard is called Hamara, the Norse word for Hammer, for that is the shape the river takes seen from above.

Place names often tell stories, Loch Pooltiel and the graveyard in Glendale are a beautifully sad chapter in the history of an t-Eilean Sgitheanach, the Isle of Skye: a dead Danish prince, washed ashore and buried near a now lost church, a story told in nature and not on stage.

Goodnight sweet prince – Where  flights of mermaids brought thee to thy rest.

One thought on “goodnight sweet prince”